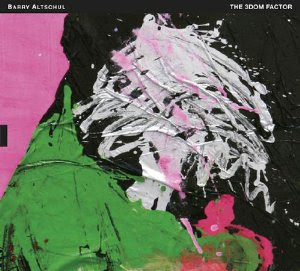 If Barry Altschul was less present in the past few decades than one might have hoped, he is most assuredly back. At age 70 he has been sounding great, gigging with important cats new and older, and now he has a new solo album, his first in many years.

The 3Dom Factor (TUM 032) pits Barry as bandleader with a lively trio of Joe Fonda on double bass and Jon Irabagon on tenor in a program of Barry's compositions, many of which are well-known from previous Altschul band recordings, some new, and one classic Carla Bley piece. All get new life on this disk.

This is a trio that works together very nicely. Joe Fonda is a presence whose playing has the sort of dynamic virtuoso, hitting-it quality Barry always responds to in a bassist. Jon Irabagon has been gigging and recording with Barry over the last few years, and quite productively so. He is also the sax presence in Mostly Other People Do the Killing and Jon Lundbom's Big Five Chord, two highly acclaimed outfits of today. Jon plays with a full grasp of the history of music, has the humor of a Sonny Rollins, and comes across freely with lots of imagination and ability. He is a tenor of today, destined one hopes for many great things to come.

Put the three together with these tunes and you have some damned fine music. Barry has all the fire and drive of yesterday and the ability to swing as mightily as ever while still being a primary innovative force in imaginative and creative free drumming.

The album is a joy!