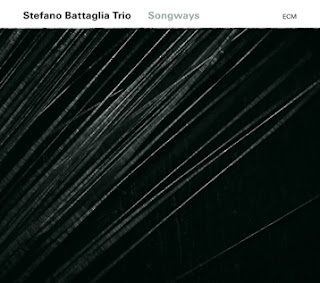 Those who like a piano trio that has both free-flowing post-Trane, post-Tyner/Alice Coltrane tremulous modal suspensions and the sort of poetic lyricism of Keith Jarrett, his precursors and those that have followed in his wake will find Stefano Battaglia's second album Songways (ECM B0017998-02) a good listen and an extension of those stylistic avenues.

As Stefano himself puts it, he was seeking in the new album a "harmonic balance between archaic modal pre-tonal chant and dances, pure tonal songs and hymns and abstract texture." The mix he achieves is a source of his originality as an artist. It is beyond the improvisational roots he shows by rooting itself in the roots of musical prototypes from romantic and pre-romantic, pre-formalist musics.

That is to say also that it is music that shows little trace of post- pre- and bop-inflected improvisation.

His trio mates support him freely and effectively in what is primarily a piano-driven sound. Salvatore Maiore has a full and harmonically pivotal role to play in the group and he does it well. Roberto Dani takes the sensuous sound producing property of his drum kit and non-pulsatingly activates accompanying gestures that flesh out the music appropriately.

It's balladic music that in some ways extends the quasi-impressionist aspects of Bill Evans and Paul Bley and their work in this vein. But in so working in this area Battaglia comes to a personal lyrical center in himself that grows the music and shows much artistry.

A new balladry, then.

Posted by Grego Applegate Edwards at 7:00 AM