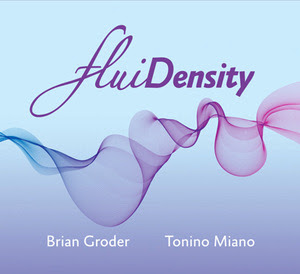 Brian Groder, trumpet, and Tonio Miano, piano, carve out an improvisational niche on FluiDensity (Latham-Impressus CD) that is a smart mix of avant jazz and new music. In a series of freely flowing but focused duets they show a mastery of a tumbling, widely harmonic, melodically rich tonal invention.

Brian Groder plays a singular trumpet. He can be dense, soulful, technically diverse and melodically pristine, all in one gulp, and that he is on these recordings. Tonio Miano makes the perfect foil for Brian on piano. He has some of the forward momentum of a Cecil Taylor but his cascades are musically distinct. He is all over the place on the instrument but at the same time has ideas in his phrasings that sound as if they could be composed, in that they have a logical, speaking component, so to say.

There are parts that do indicate either extraordinary telepathic synchronicities or pre-planned motifs. They could be either and that says much of the flow of the music here. On "Pinion" they do specifically reference musical quotations from a Frederic Rzewski piano composition. Otherwise it's a music of free thought, or so it sounds.

If you are looking for free but very meaty content in a trumpet-piano duet set, look no further. This one is a model of what two fine players can come up with in the course of a recording session.