Louisiana Red, When My Mama Was Living 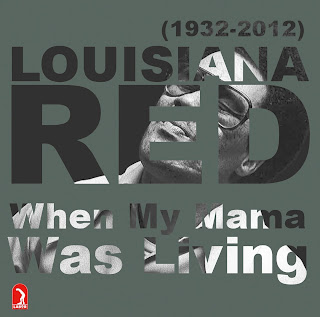 If Louisiana Red (1932-2012) didn't get as much recognition as others in the blues world, it wasn't because he wasn't good. By the time Kent Cooper recorded him in the mid-'70s, he had given up and was working a day job in New Jersey. He had scored some hits in his earlier years but had not found a way to turn that into a living.

We are fortunate that Cooper made that record, released at the time as an LP but apparently not widely encountered in blues sections of record shops. When My Mama Was Living (Labor 7085) shows a mature, talented bluesman who mostly worked in the acoustic country blues style of an earlier era, but straddled into urban sounds as well.

Many of the sides contained on the CD release were not put out originally and all of it has that living ring of truth of a master bluesman.

Blues fans need to hear it. And hear it some more!