Ches Smith and These Arches, Hammered 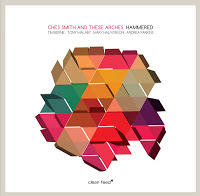 The world of improvised music does not guarantee a predictability. That is what can generate excitement, especially if you are "in on the ground floor," at the gig or otherwise bearing witness to new sounds, in person or captured in a recording. Ches Smith and These Arches have that "ground floor" feel these days, especially on their new, second release Hammered (Clean Feed 270).

The album features compositions by the leader and the band is of the all-star avant sort: Ches on drums of course, then Tim Berne on alto, Tony Malaby on tenor, Mary Halvorson on guitar and Andrea Parkins on accordion and electronics. Andrea may be a lesser-known member, but her accordion goes a long way to distinguishing this group's sound.

So what is that sound? It's avant and very lucid, solid-rock inflected but stratospherically bound. Given the world-class caliber of these improvisers, it is all-over inspired. The compositions and Ches' forward moving and forward looking drumming give direction and the band follows suit. Sometimes (maybe because of the sound of the accordion but also the compositional spin) it has an almost village folkiness to it, though it gets very outside. If Stravinsky, Hendrix and Dolphy lived in that village, their children might sound like this!!

Everybody has encountered recordings that featured a interesting, even great lineup of players that brought on expectations of great music, then found some disappointment when listening. This is NOT one of those recordings.

There are so many stylistic strains that go into the final makeup of the music, the piecing-together is so well conceived and skillfully executed, yet so unexpected, you need to ear-hear this one a couple of times before you get smitten. And hey, I am smitten with this one.

Ches shows us that he is a bandleader and composer of much talent. I hope this exceptionally supercharged combination of players can keep going as a unit. It is some exceptional sound they conjure before our ears!