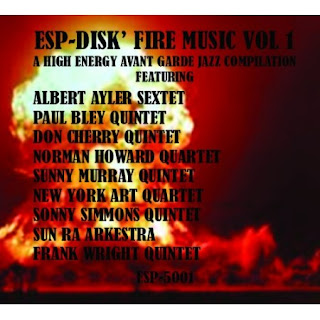 After Ornette Coleman sounded the clarion blast of freedom in jazz in the late '50s-early '60s, others began to enter the fray. A new music rapidly evolved, mostly out of New York. By around 1966 it was in full bloom.

ESP Records was there to record many of its important participants, from Ornette himself to many if not most of the seminal players of that decade.

For those who don't have the time or space to get all the important releases of the label in this vein, ESP has wisely put together an anthology of some of the highlights: Fire Music, Vol. 1 (ESP). To celebrate their 50th Anniversary year, ESP looks back to some of what put the label on the map in the first place and in the process covers the new thing jazz in its original, full-blown first wave. The music startled many at the time and this collection gives you the undiluted, heady version in all its glory. Or a bit of it anyway.

Since this is volume one and no doubt there will be volumes two and etc., this is not the place to quibble with the initial selection. It is a goodly assortment of firey free jazz played by well- and lesser-known denizens: Albert Ayler, of course, Frank Wright, Sunny Murray, the rather obscure Norman Howard (related to Noah?), John Tchicai, Roswell Rudd, Paul Bley, Don Cherry, Sonny Simmons and Sun Ra.

I've lived with the complete albums in just about every instance for many years and know them by heart, mostly. So I have no idea what someone new to this music will hear if they buy the anthology. Dedicated avant fans who have had the time to amass a collection probably will have most or all of these disks already. The new folks are in for a learning-curve experience. It's something you'll take to naturally and then grow into or you won't. I do think that the desire for the "new" is what puts you halfway there.

Those who make that effort are in for a world of historic fire, so to speak. There is lots of energy here, lots of expression, lots of iconoclastic wall tumbling.