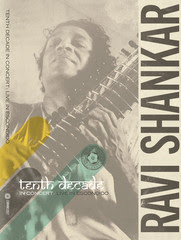 Ravi Shankar is no more. That is, he is no more as a living physical entity on this earth. His music, his spiritual energy lives on, and it will as long as we have the ears and human goodness to comprehend such things.

As if to confirm that and to keep it all in motion, we have a DVD of a later concert appearance, Ravi in his '90s, from 2011--Tenth Decade in Concert: Live in Escondido (East Meets West Music 1007).

Ravi brings in a larger-than-usual group, with two tampuras, a second sitarist to reinforce lines in the compositional sections and as additional sound, flute and kanjira, tabla, and tabla tarang.

The full concert is I believe present on this disc, and it is a good one. Ravi sounds wonderful. Though he does not attempt the most difficult of technical feats he routinely locked into early in his career on, he shows the full wisdom of his melodic genius, with sublime play in alap and mid-tempo.

Ravi Shankar the leader and musical innovator shows itself as strongly as ever. There are compositional elements on display, innovations such as the combination of tabla and tabla tarang harmonizing in some of the tal cycles, and the example of Goonja Sitar, an unusual sound produced by dampening the strings with a cloth near the tailpiece of the sitar.

Melody was all conquering that day, as was rhythm. The rhythmic interaction of Ravi and Tanmoy Bose on the tabla is superb, as is the percussion interlude of Bose, Samir Chatterjee on tabla tarang and Ravichandra Kumir on kanjira (a kind of tambourine-like drum).

Ravi Shankar shines forth with all the brilliance of his being in this concert. Ill, near death, physically somewhat frail, he nevertheless gives you the essence of his greatness. He shows as much as ever the joy and devotion to music that made him the master--the intense concentration, the triumph of music over matter.

He changed our world. He will ever change our world. This DVD shows why. Even toward the very end of his life. The DVD depicts a moving performance, a beautiful ensemble, and the presence of inspiration and love. Get it and you will be put in a very good place.