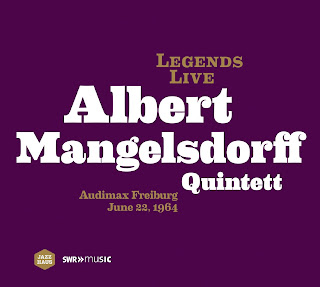 Albert Mangelsdorff's Quintet of 1964 was a beautiful thing. The band played new jazz versions of Asian pieces and original compositions reflecting the melodic feel of Asian music, from Ravi Shankar to Indonesia to Japan.

The quintet was a well healed outfit with Mangelsdorff of course on trombone, Heinz Sauer on tenor and soprano sax, Gunter Kronberg on alto sax, Gunter Lenz on contrabass and Ralf Hubner on drums. They released several excellent LPs that did not get much distribution in the States (to my knowledge) at the time. It was only in the later '80s that I caught up with them.

The band used the pianoless format that Ornette had made so critical an element of new thing jazz and the rhythm section had something of the force and drive of the Haden plus Blackwell or Higgins lineup of Ornette's classic group. Mangelsdorff played in a pre-multiple tone fashion that showed already that he was in his own class. In Sauer and Kronberg he had stylistically sympathetic and quite good soloists and of course the makings of a three-horn frontline that were especially prominent in working through the head structures of the pieces in the band's repertoire.

On June 22, 1964 they played a concert at Audimax Freiburg which happily was recorded in excellent sound. The master tapes have been transferred to digital format and are now available as a Jazzhaus CD (101 706), Legends Live, Audimax Freiburg.

It is I must say a thrill to hear the band in such beautiful audio quality, live and in their prime. They run through their "world jazz" repertoire in 70 minutes of inspired soloing, hard driving swing and beautifully performed arrangements.

Whether or not you have the original record releases you will find this CD enthralling I suspect, a revelation perhaps, and otherwise a fantastic go for the Quintet. It's indispensable listening.