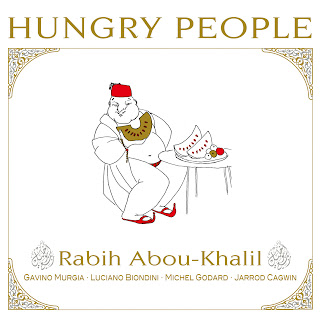 I've been listening to the music of oud player, composer, bandleader Rabih Abou-Khalil with interest for quite a few years. He has absorbed the oud tradition as practiced in the mid-east and created a modern sound that is as much mid-eastern as it is influenced by jazz fusion.

He has a new one, Hungry People (World Village), and it's good. He is joined by his "Mediterranean Quintet" of accordion, drums-percussion, contrabass/tuba, and soprano sax.

The band straddles eastern Mediterranean ethno-folk styles and traditional oud taqsim. Rabih is an excellent player and his bandmates have harnessed their considerable musicianship to a very spirited compositional amalgam that has rhythmic excitement and melodic substance.

A nice one! Get on your dancing shoes!