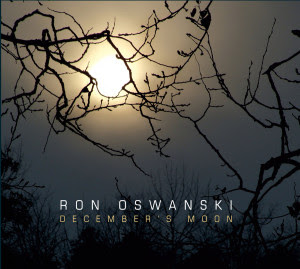 Ron Oswanski is a post-Young B-3 exponent with a fruitful record of associations (from the Maynard Ferguson Big Band to Milt Hinton and Maria Schneider) and a decided stylistic difference. In his formative musical years he became enamored with the ECM sound, especially Jarrett and Garbarek.

So his music has a contemporary post-bop bent that is harmonically full and compositionally lyrical. His playing is far out of the Jimmy Smith grits and gravy thing and more toward a modernity that lets the organ speak a newer vocabulary, and very eloquently at that.

You can hear this happening on his long-in-coming debut album as a leader, December's Moon (Tames Palmetto TR002). With few exceptions it's an album of Oswanski originals, some balladically rhapsodic, some drivingly jazz-rockish and contemporary, and a nuveau Baltic polka (with Oswanski prolific at the accordion).

For the rhythm section he is most ably served by the formidable John Patitucci on acoustic and electric basses and a somewhat less-known but very appropriate Ian Froman on drums.

Jay Azzolina plays some sparkling acoustic and electric guitar, the still great John Abercrombie has things to say on guitar for about half the numbers and Tim Ries plays beautiful tenor and even hipper soprano.

It's progressive jazz that has plenty of compositional and improvisational meat on the musical bone. Everybody comes off sounding great, especially Abercrombie, but it is Oswanski's day in the light, so we get to appreciate his playing and hear a different organ force out there, one most welcome and singularly endowed.

Plus as an album it all hangs together well. It's a great listen, which is a reason we turn on music, right? So turn this one on a few times and you'll get it and it will get to you, I think.