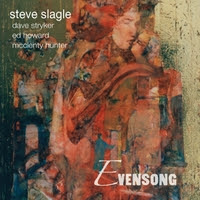 Steve Slagle has paid all the dues and more, and emerged as a saxophone mother! Listen to him on alto and soprano on his new Evensong (Panorama 004). It's there!

Three things are happening that make this album superior to the usual. One: Slagle and Dave Striker's interaction and solo prowess. Striker is some guitarist of course and shows it here. Two: the larger-than-life swing of a great rhythm section of Ed Howard on bass and McClenty Hunter at the drums. Hunter is a kicker! And Howard holds it together with style and heat. Third: a set of very game compositions by Slagle and a few also by Stryker, and then a beautiful version of Strayhorn's "Star-Crossed Lovers" with a moving Hodges tributorial nod.

It's the sort of CD you'll want to pull out to clear out the cobwebs and remind yourself why you were attracted to jazz in the first place. It has that kind of immediacy. Wow.