Hope Wechkin, Leaning Toward the Fiddler, Music for Voice and Violin 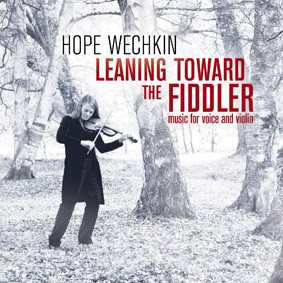 When there's something unexpected but worthwhile and it fits not exactly anywhere snugly in either of the three blogs, I tend to put it where it might shake things up the most. So here we have today Hope Wechkin's Leaning Toward the Fiddler (Ravello 7872). It's a series of pieces performed simultaneously on violin and vocals by Hope. There are originals and Balkan folk songs in arrangement.

She plays excellent violin in an archaic folk-fiddle style. Her singing takes a little getting used to. It's a little less folkish than one might expect but puts across the songs in ways that project. I loved the folk songs. Her originals extend the sound and also take some adjustment on the listener's part, since they are contemporary songs with folk roots, not old folk songs per se.

But the fiddling makes it all worthwhile. She has a very interesting way! Get used to the singing and you will start appreciating what she does, or don't and revel in the fiddling anyway!