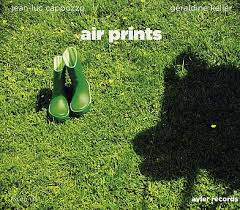 There is music out there that may not get the attention it deserves because it is somewhat esoteric, demanding of concentration, not necessarily difficult but Zen-like in its singleness of purpose. I believe that would describe Jean-Luc Cappozzo and Geraldine Keller's Air Prints (Ayler 131). Now that is by no means a put-down. Far from it. It is only to say that this music brings its rewards like a well-crafted set of boxes-within-boxes. You must be ready to open up to each stage to get the whole set assimilated.

The first thing you will notice is the almost ritual, chant-like vocals of Geraldine. It is a voice that goes well with her flutes, in fact is almost flute-like itself at times. On other occasions there is something a bit exorcising about what she is vocalizing. Her flutes have a world-sound at times. Jean-Luc plays trumpet with brassy boldness but can also take on sotto voce qualities. He has a slightly Dixonish growl sometimes, a Bowie playfulness at times, other times something else that comes out of where he is as a player right now.

It's a set of free avant provenance and it goes where you might not expect. So in some ways it's not only the novice that has work to do; the old hand at avant-free will find there are world and new music qualities here that need your attention if they are to come off. So in no way is this precisely easy listening in the Ivesian comfy-sofa sense.

I don't have much more to say except that after five hearings I still feel like I have not entered the inner sanctum of the duo's musical minds. That's saying something. I am not sure yet what. It's a definite adventure!