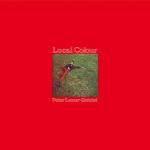 Here we have a Peter Lemer Quintet album from 1966, his only as a leader and quite a nice one. Local Colour (ESP 1057) must have come and gone quickly because I certainly don't remember seeing it in the shelves by around 1970 or so when I started actively filling out my knowledge of avant jazz, but no matter because it sounds as vibrant now as it must have then.

Lemer studied with Bill Dixon, Paul Bley and Jaki Byard in the States, most certainly reflects the great deal he absorbed, later recorded with the Spontaneous Music ensemble, and also played with Annette Peacock and Harry Beckett, Gong and the Baker Gurvitz Army. Impressive credentials and he lives up to them.

John Surman is in the quintet on soprano and baritone. It was his first recording but he sounds already in full flower. The very obscure Nisar Ahmed Khan is on tenor sounding quite fit. But who is he? The press sheet tells me he was involved for a time with the Crazy World of Arthur Brown and Robert Wyatt. He fits right in here at any rate. Then John Hiseman is on drums, the fellow who later founded the jazz-rock outfit Colosseum. The bassist is John Reeves, who also was in that band.

So that is the line-up. They run through Carla Bley's "Ictus" nicely, then proceed to five Lemer originals. They are fine, even memorable, but in the end you especially hone in on the new thing avant piano soloing Lemer, the two-sax punch of Surman and Khan, and the kinetic heat of the rhythm team.

It a very nice surprise to hear this album now. There is a timelessness that applies to any of the well-done New Thing sides from the era. And this one is so obscure you probably never heard it. Now's the time. Recommended.