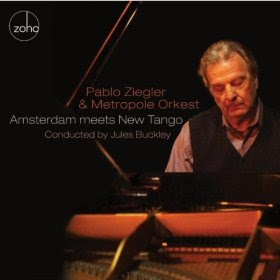 Where we can go musically these days is...anywhere. And when we do and it goes well, we all gain a great deal in the process. That's how I feel about Pablo Ziegler & Metropole Orkest's Amsterdam Meets New Tango (Zoho 201307).

Now as we all know the tango is first and foremost a dance originating if I am not mistaken in Argentina and spreading throughout the world in a big way last century. Of course it is also a musical form, with a pronounced rhythmic feel and certain melodic-tonal aspects. The history of this music is so rich and evolved that my knowledge of it spanning the advent of recorded sound is growing month-by-month, thanks in great part to what I can experience of the very early recordings on the internet and its continued vibrancy. It is one of the musical frontiers for me right now. So this innovative musical treatment of the form comes at quite the right time, personally speaking.

But more than that Amsterdam Meets New Tango is one of those landmark new things that comes at you and you recognize it straight off as such. Pablo Ziegler is a critical and important exponent of New Tango. And he shows us why on this album in a big way.

Ziegler plays a very sophisticated jazz-tango piano throughout. He is joined by other soloists to good effect--namely Quique Sinesi on nylon string guitar, Walter Castro on bandoneon, Quintino Cinalli on percussion and cajon. The fully-engaged, fully fleshed-out Metropole Orkest also provides good soloists that enter into the music as called for. The group for this project is a conjoining of a big band jazz outfit and an orchestra with strings and the like. Jules Buckley conducts, and an admirable job he does.

So those are the elements. The point of it all is to create an innovative compositional large group New Tango setting that has tango, jazz, orchestral, big band progressive elements, and to do it with real flair and innovative authenticity. All but one of the compositions are by Ziegler; one is by Sinesi.

What makes this work is the vibrant contemporary tango-plus-jazz plus-modern-compositional-elements and wow, does it work or what? It's a beautifully performed, beautifully written, beautifully improvised series of pieces. It takes on traditional tango motifs and the world of music today and combines them in ravishingly terrific ways.

I can't say enough about this one without rattling on and on, so I wont. It gets my highest praise!! Ziegler is tango genius!

Posted by Grego Applegate Edwards at 7:24 AM