Wheelhouse, Boss of the Plains 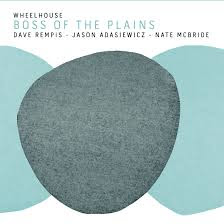 We return today to Dave Rempis' kickoff of his new label with release two, another good one. It's Rempis on alto and baritone, Jason Adasiewicz on vibraphone, and Nate McBride on acoustic bass under the collective name Wheelhouse. The album is Boss of the Plains (Aerophonic 002).

So there is most definitely a sound that has come about, a chamber freedom that has heat but also space and mood. You can hear it fully on Boss of the Plains. Of course all three have gotten the respect of peers, critics and audiences alike in their own right.

Adasiewicz by now is well-established as a star of the vibes with much of something new to say within a lineage of important stylists on the instrument. He is not derivative in the least but he clearly carries that lineage with him as an unstated basis from which he springs highly and with agility. Nate McBride of course is simply one of the most inventive and complete contrabassists on the scene. And Dave Rempis is at the top of the list of the new Chicago saxophonists, no small feat given the wealth of horn talent there. He carries with him a feeling for the avant tradition of those that have come before (and right back to the earliest period of jazz at that) but he has an exceptionally fertile imagination and so creates inventive line and tone universes time and again. He is one inspired cat. And with him playing the baritone here as well as alto there is a second sound to bring his ideas and timbres further to the fore.

So that is the basic set of player-ingredients and something of what they are about. And on this album they give us a generous set that shows you how far afield their explorations can and do carry them. There are free balladic episodes that showcase the quieter side, and in that probably no one can touch them for sheer free eloquence. Then there are the more heated moments and here too they come off as masters of their own sound and pacing.

There no doubt could be more I might say here about the music, but the point is the music more than my saying. So I will leave off with the idea that this is chamber jazz fully into the future of the present, here now and I do believe, here in the nows to come. It's important and it is satisfying. Give it a good listen and I think you'll hear what I am hearing!