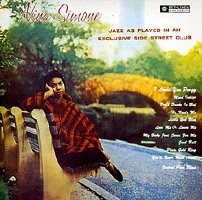 The Bethlehem series of jazz recordings appear to be coming back. There have been at least two major reissue cycles that I can remember, the first as LPs, the second on compact disk. In the second cycle the Nina Simone debut from 1958 Little Girl Blue (Bethlehem) never got to me and so I presume it never got onto CD, but I did have the album originally on LP and I am glad it's back. It's Nina all the way, holding forth on vocals and piano in a jazz trio setting that includes a young Tootie Heath on drums and Jimmy Bond on bass. They sound fine but it's Nina who steals the show.

At the time Nina was aspiring to be a classical pianist, I read on Wiki, and you can hear that in some of the fugal treatment of themes--sounding oddly enough Brubeckian in those moments. Otherwise her pianism sometimes has a straight-ahead accompanying role, other times there is almost Duke Ellington, quasi-Monk-Basie solo and space in her playing. She convinces in the bluesy corners of her playing, less so with some of the nightclub fanfare things.

But as interesting as all that is, Nina the singer is what makes this album worthwhile. She already had it then. A slightly smoky instrument of great beauty, impeccable diction so that the lyrics come right at you without a moment of sacrificing lyric to melodic line--but she has a way with phrasing, a very subtle thing. In all that she comes across at this stage as somewhere between Sarah Vaughan and Carmen McRae, only it's Nina with all that she was to build upon over the course of her career.

Other than a couple of piano showpieces mentioned above, the music has some well-known standards and some ones I don't think I've heard elsewhere. It's hard to imagine a more moving performance of "I Love You Porgy" than the Decca side by Billie Holiday, but Nina's version comes pretty close in its very own way.

So that's what this is all about. Some totally solid Nina at the very beginning, swinging, singing and giving notice to the world that here is a major voice. If you don't have it and like the greats being great, this one fills that bill well.