Michael Bates Samuel Blaser Quintet, From One to None 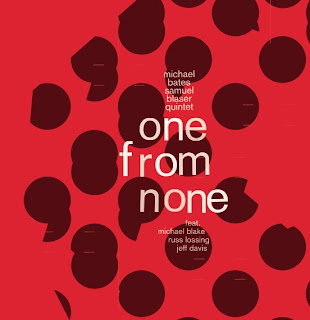 Samuel Blaser is one of the important new trombonists out there. I've covered two of his albums previously on these pages (see January 11, 2010 and March 28, 2013 posts). Now he returns with a quintet co-fronted with bassist Michael Bates, on a recent album One From None (Fresh Sound New Talent 414).

This is a kicker of a group going through some avant-propulsive jazz with real flair. Bates is a bassist anybody would love to have on a session--he boots everybody forward with style and drive. He also writes the charts for five songs and they work well. Blaser sounds excellent again and turns in three charts of his own. He has a worthy foil in the tenorism of Michael Blake, a player we've all gotten to know and dig for his post-Trane heat and inventive vocabulary. Russ Lossing plays the Rhodes for most of the session and gives us a reminder that someone who knows what to do can give such a quintet a real sound with that instrument (and so he reminds along with the band sometimes of the seminal early '70s lineups that used it) and he also gets in good things with the conventional pianoforte on one or two of the numbers. Drummer Jeff Davis is a push ahead, a combustible time keeper with finesse and fire and a freetimer that doesn't waste strokes but gets right to it.

Maybe most importantly this is a group sound, a group effort with all artists working together in the written and the improvised to get a cohesive and distinctive sound. They do it and they do it very well. Fully recommended!