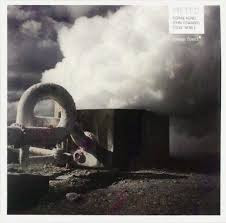 I don't recall having heard pianist Sophie Agnel before her new trio release Meteo (Clean Feed 272), a live date. But apparently Sophie and the trio with John Edwards on contrabass and Steve Noble on drums have had others. This one gives us a long continuous improvisation squarely in avant-free territory.

We have here a very well integrated three-way effort with sensitive sonic sound coloring that is sometimes quite boisterous but more often on the less dense side--not sparse but pointilistically give-and-take, with as much in the way of sustained legato soundscaping as in the way of staccato hot-potato passing.

It's so successful a group thing that it's more a three-headed improvising beast than a matter of stars soloing, though what each is doing makes for a three-star constellation. Sophie gets a series of excellent sound-sculptured utterances via inside the piano jangles with added objects, plucks as well as conventional keyboard sounding, without resembling the freestyling of anybody else. And it turns out that John and Steve are doing just the right sort of complementary sound generating of their own to make the mix compelling.

So compelling free music is what you get. A very considerable 38 minutes' worth. Recommended!