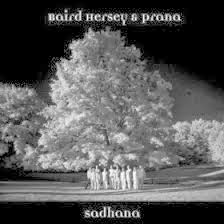 I have been taken with the remarkable vocal group Prana as headed by Baird Hersey since I heard their first album. They combine elements of traditional Buddhist chant with overtone throat singing and otherwise innovative compositional elements to create a vibrantly moving spiritual-aural music that increasingly evolves with singularity.

Their new album Sadhana (self-released) is realized as a twelve-movement practice (the word is what Sadhana denotes in Sanskrit) following Ashtanga Yoga wisdom. Each movement denotes an aspect of self-knowledge and spiritual attainment. The music can be closely attended to along these lines or simply allowed to enrapture you in its wondrous sonic qualities.

What interests me (one thing anyway) is how Baird and the ensemble introduce harmonic progressions, drums and percussion here and there, and at times a closer relationship to chant-in-song-form. By so doing the music will doubtless be more accessible to the typical "Western" ear. And what is so satisfying about it is that by so doing the music is no less enthralling and sonically enlightening.

Included on the album is the single "My Foolish Heart" released earlier. It is an enchanting song-chant by Krishna Das (with whom they have collaborated in the past) who sings the haunting refrain along with Prana. It's pure magic. But then so is the entire album.

By all means drop everything (well, not everything) and get this one. Seriously, it is vocal music like no other--American World Music if you like. And it is really amazing to hear.

Posted by Grego Applegate Edwards at 8:18 AM