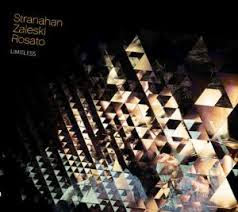 The advent of the contemporary modern jazz piano trio takes many forms these days. I use the term "contemporary modern" to distinguish the style from neo-trad and/or hard-bop inspired outfits, groups that also don't quite fit into the free-avant camps. Admittedly there are lots of fine lines in groups where things mix together, but not always, and not today. What's happening with one such contemporary modern group to come along, Stranahan-Zaleski-Rosato? Their second album has perked up my ears and so today I talk about it a bit. It's called Limitless (Capri 74130-2). I reviewed their first a while ago. Type in "Anticipation" in the search window above for that.

The trio to be more precise consists of Colin Stranahan on drums, Glenn Zaleski on piano and Rick Rosato on bass. They are rather new to the scene but nonetheless have forged a sound that bears hearing--different in interesting ways. Other than a version of Monk's "Work" they feature original compositions by Zaleski and Rosato, plus one by Stranahan. The approaches in the compositions and the follow-through in improvisations that come after are key. Compositions have a capital /C/ with these guys and do distinguish them from some others.

"Work" has a touch of the classic Bill Evan's trio. The rest branch out with that idea as a touchstone but then take it beyond. All three are first-rate players. The drumming of Stranahan has dynamics and strength. Zaleski has a well developed modern harmonic pallet and invention as a constant. Rosato has the fundamentals strongly down pat. He gets a beautiful tone. He can solo in ways that are worth hearing and his ensemble work is impeccable.

You could say the above about many players. What strikes me listening is that as a trio they thrive on some hip ideas that are rooted but stand on their own with a refreshing newness. They are the sum of the parts as much as they are more than that--meaning that each player is doing something good and the trio-as-trio hangs together as an entity well ahead of the norm.

I don't know these days what "making it" means, how as a part of many new folks on the scene people will be able to keep it together as a working group, and whether that will be a living for them. These three deserve a chance to continue because they really have something of their own and the hearing of it makes you think that such groups can have a future. I of course have heard others, but this is one for sure. An excellent one. Patronize the new names and the old. They need your support.

Definitely recommended. Good luck to them!

Posted by Grego Applegate Edwards at 6:57 AM