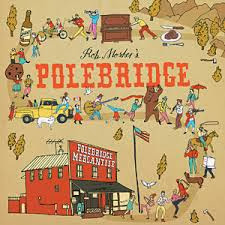 The colder it gets in my office the slower my computer responds. Currently it's 52 degrees and things are going so slow that screaming is an option I'd almost consider. But then I remember the music, the musicians and my responsibility to do them justice, not to short-sheet them because I want the comforts of grandma and home. Enough!

What we have on tap is most unusual. It's Rob Mosher's music--that somehow conjoins sounds of the old Wild West, or at least suggestions of it, with a chamber jazz suite that captures Mosher's humor and dash. He calls it "Chamber Jazz for the Wild West, inspired by Polebridge, MT, population 88. Schumann and Prokofiev drunk at a saloon piano." In short, Polebridge (self-released).

This is zany and off-kilter at heart. The ensemble has Rob on soprano, clarinet and English horn. Then there are six other instrumentalists, mostly strings and winds.

It came out last June but that should not stop you. Carla Bley comes to mind but only as a precursor--and in her whimsical-sarcastic mode. If you like something well-written with jazz underpinnings yet somehow sounds like it's coming out of a Wild West saloon, this is for you! Seriously.