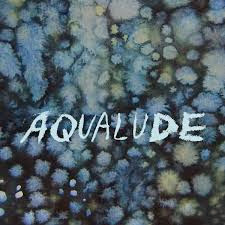 Dana Lyn, Dana Lyn. A name that sounded vaguely familiar to me when I received her latest, but no clear recognition came to me. She's living in Brooklyn, which right away said something to me. Seems like everybody is living in Brooklyn now, almost. Well not everybody. I am over on the Jersey side. Some still can manage Manhattan somehow, but it's usually because they have been in their space a long time and etc.

So Dana Lyn. Violinist. Composer. She plays Irish folk sometimes. Not here. Her background is quite variegated. Is that the right word? No. Google says "exhibiting various colors". Well that works actually, if you think of colors in the musical sense. There are classical influences, rock and jazz, a folkishness and an undefinable something, which is originality.

Her first album (she's already working on a second) is Aqualude (Ropeadope), music that has something to do with the sea, among other things. It's one of those musical offerings virtually "beyond category". Dana is on violin, Clara Kennedy on cello, Mike McGinnis on clarinet, Jonathan Goldberger on guitar, and Vinnie Sperrazza on drums. On three cuts an unusual instrument called the "angel door" is utilized. It looks something like a Kalimba attached to a door-like frame. Is it bowed? I think so.

Beyond that is what especially counts. The album is a real gem. The music has classical-meets Brooklyn avant-meets new fusion-meets modern postbop. Very post- postbop.

Uncanny? Well there is such originality here that uncanny works for me. It's essential if you want something so unusual that it will take a while for people to catch up. But the music is not "difficult", as can be the case for ahead-music. Sometimes the lineage of Zappa, when he was writing music beyond what anybody expected, comes to mind. Though it's not that she sounds like him, though. It's beautiful. It's not brimming over with solos, though it has them (and they are cool), because this is more compositional.

A glorious surprise! Get it!