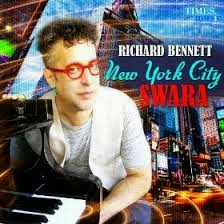 Who knows what's next? In life it's impossible to know for sure. In music you don't know exactly either. So Richard Bennett and his digital-only release New York City Swara (Times Music) when I received it was just another release in the "great (or not-so-great) unknown". That is, until I heard it.

It's Indian fusion, featuring his piano and melodica teamed with a talented group of New York jazz and classical Indian instrumentalists.

Bennett plays raga-like improvisations on his instruments that also have harmonic & contemporary jazz and even modern minimal components. He's good and unexpectedly so in the way he genuinely combines it all. The instrumentalists have nicely composed elements to work off of and/or spots for improvisations. The music hangs together with a kind of brilliance.

Surely this is one of the most successful endeavors in this realm I have heard in a long time. It has a real South Asian feel to it but then is very New York, too.

If you like these sorts of intersections this one will get you! And even when you know what's coming in a general way, it surprises. Put your ears on and dive in.