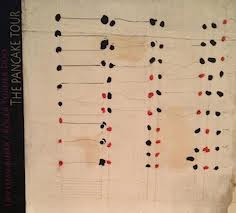 Relative Pitch records has been releasing consistently interesting avant free jazz music for a number of years now. I return to one I didn't cover that is several years out, a focused duo between Urs Leimgruber on soprano and tenor and Roger Turner on drums. The Pancake Tour (Relative Pitch 1007) gives us seven improvisations recorded in Cologne in 2011.

The sound of this music is heightened by the deliberate limiting of the drums to just a snare, tom tom, hi-hat, cymbals, an "f-blade", a chain, and "the comb". What this does is to force Roger Turner to work deliberately albeit spontaneously on the timbres he can extract from what is available to him. He does this quite well. In the end he doesn't sound typically drummer-like in what he does much of the time, more new-music orchestral.

In that way he sets things up for Urs Leimgruber to respond with vertical timbres and textures on his saxes more than horizontal jazz-ish lines.

The hour of music on this recording continues working within those constraints with moments that are somewhat sparse, some in the middle zone of activity and volume, and a few minutes here and there of more intensive scorching.

I can't say I didn't appreciate this exploration in sound. I did. The more "traditional" side of my ear-digester wanted to hear more bottom--a bass drum and a contrabass. But the objective presumably was to make creative sound essays within these limitations and for that they succeeded perfectly well.

If you like the idea of free music that is almost brutally paired down, here is a case where it works, no question about it. As always when I hear something that doesn't complete a picture as much as sketch out a presence in part through erasure, I remember that there are plenty of recordings to hear afterwards that do something else. One does not need to assume that any one recording represents THE music of the future so much as A music of today that we can appreciate. If this isn't one of my "desert-island" disks, it doesn't matter. I am not packing for an extended desert-island stay, thankfully for that. So this is quite cool with me.

Posted by Grego Applegate Edwards at 8:08 AM