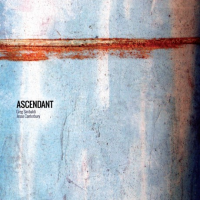 Next up in Prefecture Records' provocative series of natural ambient music is the duo of reedists Greg Sinibaldi and Jesse Canterbury and their vinyl LP Ascendant (Prefecture 010). It was recorded live in a giant cistern which had an incredibly long-enveloped echo resonance. Such an acoustic environment does not lend itself that well to any series of rapid note articulations of a chromatic sort because the sustain turns it into mud, so the two wisely avoid that kind of playing.

Other than Monk's "Ugly Beauty" Greg and Jesse alternate compositions that have especially open and sometimes sparse soundings that allow the cistern to work its magic.

The result bears contemplation and active listening. The player-composers sound many different reed instruments alternately throughout the set, providing a wide spectrum of ambient sounds, suspended chords, unisons and a kind of organum of drone and tone, space and sound that is positively enchanting to hear.

Posted by Grego Applegate Edwards at 7:07 AM