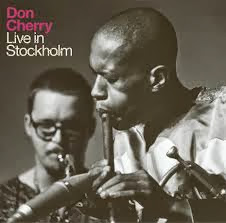 Don Cherry spent fruitful time in Stockholm in the later-sixties-early seventies. Caprice Records released a double album of cuts Don and company made in the earlier seventies but there were also some live recordings from 1968 that Don decided not to release because they were by then several years old. Then another live session from 1971 also never saw the light of day. Luckily Caprice kept the tapes on ice and we now have them to revel in on the new CD Live in Stockholm (Caprice 21832).

There's well over an hour of live music with a good sextet and quintet, including Bernt Rosengren and Okay Temiz. This was a fertile period for Don, where his own version of new thing began cross-fertilizing with his ethnic-world stance. You can think of this music as the larger band equivalent of Mu, the remarkable duet double album Don did with Eddie Blackwell in 1969. It is what can be done with a larger ensemble. It hearkens back to his Blue Note and Copenhagen sounds while entering the whole-grain music world Cherry kept working at and developing until the end.

This middle period I find very satisfying, not so much here for the individual soloing (which has definite moments) as for the group sound, the collective solo-ensemble concept.

If you love Don you will love this. And even if you don't. It's a wonderful revelation, a missing piece of the Cherry puzzle!

Posted by Grego Applegate Edwards at 7:21 AM