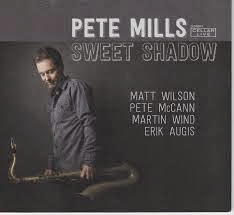 When you sample many jazz disks like I do every week in my role as reviewer here and elsewhere, some releases let you know within a minute that they are very much happening. Others take a while and in any event I generally stay with the first hearing all the way through. The latest album by tenor saxophonist Pete Mills, Sweet Shadow (Cellar Live 070813) had that one-minute recognition feel to it.

After only the first minute I knew that a) The rhythm section was totally primed and swung incredibly well, and that b) Pete Mills was playing real-deal jazz on his tenor. The rest of the album told more of the story, of course, but I knew immediately what the entire album confirmed, that this was a hard-charging, very swinging set of modern contemporary jazz.

Pete Mills plays a present-day sort of tenor that reflects a post-bop stance without sounding derivative in any obvious way. I wont say he sounds like Joe Henderson because he doesn't. But he parallels Henderson in a way with strength and drive. He is in a league with Lovano-Brecker-Bregonzi-Garzone sorts of modern tenorism, but again it's only by analogy. He doesn't sound particularly like any of them in any direct sense. Pete also crafts some excellent and hip blowing tunes, 12 of them. Along with an Ellington-Strayhorn and a Roland Kirk classic they set things up well for the band.

And the band is something very good. Matt Wilson at the drums makes things swingingly combust, in excellent tandem with Martin Wind on bass. Pete McCann on guitar and Erik Augis on piano fill things out with nice comping and something to say in the solo department.

All I can say is. . . put this one on for a minute and you'll get it. Excellent!