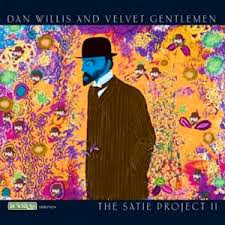 I am almost surprised to say this, but the stature of French renegade composer Erik Satie has grown. It was in part helped along by John Cage's set of piano pieces that paid homage to Satie, "Cheap Imitation". And these days there are composers who have learned something from the diatonic eccentricities and chromatic unpredictabilities that Satie was known for and made something new in their own way out of it all.

And now we have a very adventuresome Satie "cover band" so to speak. Dan Willis and the Velvet Gentlemen take Satie's music as a launching point and make some pretty outside rock-ish jazz from it. This on the disk at hand, The Satie Project II (Daywood Drive 1014), which reconfigures some of Satie's more interesting works for a ten-piece band.

Dan Willis heads the outfit, plays reeds in interesting and sometimes improvised ways, and arranges the music with a good deal of imagination.

There are moments that actually startle with reharmonizations or bold general treatment, here as an out-rock piece, there as a jazz-inflected segment, still further as an electric-acoustic contemporary through-recomposed song.

It takes a little getting used to, because nothing is exactly what you might envision. After two hearings I was surprised to find it quite enthralling. I expected Deodato's "Zarathustra" but it wasn't so facile, not a bit. It's way more interesting and involved.

Well, so I do recommend this!! It will surprise you.