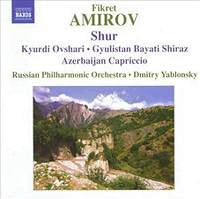 The traditional folk strains of Azerbaijan have that lyrical minor-mode sound that much music of the middle-east is known for. Fikret Amirov (1922-1984) was a pioneering "nationalist" composer who incorporated his native Azerbaijani folk music into symphonic works of charm and appeal. The Naxos release at hand presents four such works, written between 1948 and 1971.

Admittedly Amirov's style is a bit of an anachronism. He sounds like a nationalist composer of the turn of the century or even earlier. Rimsky-Korsakov and Tchaikovsky were important influences. If J. S. Bach is any example, we should not automatically disdain the anachronistic! Not that Amirov is a Bach. But his music deftly expresses the folk vernacular of his native land in sophisticated symphonic terms. The Russian Philharmonic under Dmitry Yablonsky do a quite respectable job realizing the passion and melodic poignancy of his scores.

This is a nicely exotic addition to your symphonic collection. If you are like me, and respond readily to the music of this area, you will find this release most welcome. If you are looking for something different and quite charming, again, this will appeal.
Posted by Grego Applegate Edwards at 4:45 AM