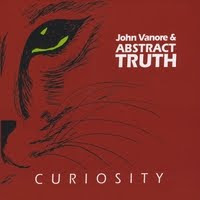 Jazz composer, big-band leader and trumpeter John Vanore shows he is a force with which to be reckoned on his new release Curiosity (Acoustical Concepts). Vanore studied with the somewhat legendary Philly pedagogue Dennis Sandole, played with Woody Herman and has perfected his writing-arranging craft in various dues-paying situations.

His band, recorded here in 1991, is tight and hard hitting. There's a very impressive brass section of eight strong players, but the entire band has ensemble presence that brings out the best in Vanore's charts. There are seven interesting band originals (four from Vanore) plus a Frank Foster gem.

If you like a powerfully modern big band sound, you certainly should be pleased with this one. I hope Mr. Vanore gets the attention he deserves and follows up with more releases like this.
Posted by Grego Applegate Edwards at 5:17 AM