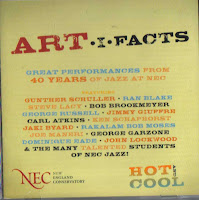 Boston's New England Conservatory, thanks in great part to the vision and intelligence of program founder Gunther Schuller, has been populated with an impressive cast of musical mentors and students since its first years of existence in the early '70s.

Conservatory-sponsored student-faculty performances were captured on tape over the years as a routine part of the workings of the institution. Celebrating four decades of inspired music-making, NEC has compiled a 14-track highlights anthology of some of the brightest moments and it is a delight to hear. These are previously unavailable and rewarding moments of light. A sample of what's on the CD: expressive solo piano spots for Ran Blake and Jaki Byard, a recreation of a Byard big-band composition originally performed by the legendary early Herb Pomeroy unit in the '50s, Greek-avant sounds from Joe Maneri, some classic charts by George Russell and Bob Brookmeyer, solo Steve Lacy, and some fine small-group outings by Bob Moses and George Garzone.

Anyone who wants to understand the Boston jazz scene in recent times should hear this; and of course those who resonate to the artists covered will welcome these rather rare recorded finds. It's a virtual treasure trove of goodies.
Posted by Grego Applegate Edwards at 5:43 AM