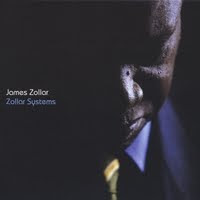 James Zollar plays the trumpet. He plays it well. He plays it primarily in the sort of mid-sixties Blue Note style, though he does not directly mimic the Lee Morgan, Clifford Brown, Freddie Hubbard models that usually find their way into the musical language of such an improviser. James Zollar's Zollar Systems (JZRZ) came out this past February and it's time to give it some thought.

Zollar is joined by a solid cast of fellow musicians. Stacy Dillard on soprano and tenor has good facility; Rick Germanson mans the piano with skill and taste, and so on. The tracks are a mix of appealing straight-ahead numbers, a standard, a couple of straightforward songs with a guest vocalist, and something decidedly odd, which we'll get to in a minute.

I should also note that Don Byron makes a very nice cameo clarinet appearance on the up "Spasmodic Movements."

Now for the oddity. "Time to Say Goodbye" is the classical crossover song that was a huge hit, wonderfully done by Bocelli and Brightman. James Zollar does a version here, which begins nicely in a shimmering out-of-time way with undulating piano and Zollar on the lead melody. Then it rapidly gets a bit out there. Enter mezzo-soprano Sahoto Sako singing a "straight" version of the melody while Zollar takes it out. It's a rather weird combination and I don't know what to make of it. It's a joke? I like what James is doing and the free Tranesque piano shimmer underneath. But what a combination, and what a jarring conclusion to what otherwise is a good mainstream effort. Actually, I'd like to hear more of this second side of Zollar. It reminds a little of Dave Burrell's outside version of La Boheme done years ago for BYG. That took some getting used to. . . and so does this. No matter.

All in all, James Zollar has given us a fine effort and some very listenable music. I am piqued with curiosity about the dual direction shown. Where is he going next?
Posted by Grego Applegate Edwards at 5:42 AM