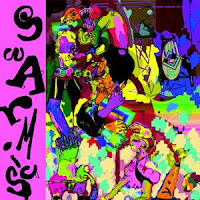 Swarmius is a four-man unit. Their music combines industrial, modern classical, world influenced music and a bunch of other things for a mix that has its own trajectory.

Heading up the band is Jozefius (Joseph Waters) who composes the music and uses a laptop to stretch, alter and augment the sounds created. Todd Rewoldt plays reeds, Felix Olschofka is on violin (quite adeptly so), and Joel Bluestone is the percussionist.

Their first, self-titled album (on Aleppo) has some rather startling musical content. Think of Zappa in his most ambitious vein. But don't think of his music; Swarmius does something different. There are driving pulses, exotic timbres, somewhat traditional sounding violin concerto pyrotechnics juxtiposed with rather untraditional accompaniment, and on from there.

The results are rather marvelous. Swarmius respects no rules about what goes with what. And that is most refreshing. Highly recommended.

Go to www.swarmius.com for more info.
Posted by Grego Applegate Edwards at 5:08 AM