Paul Austerlitz, His Bass Clarinet, His Brand of Latin Jazz 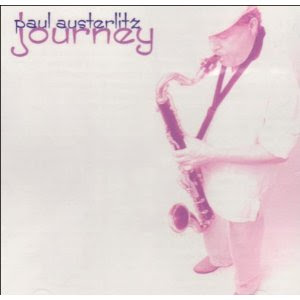 Paul Austerlitz wrote a book on meringue that I think I should read. He plays the bass clarinet, its aurally rotund brother the contrabass clarinet and the tenor sax in distinctive ways. He leads a varied group of musicians through a very hip Latin jazz program on his new album Journey (Innova).

There is some recitation of poetry (by Michael S. Harper), and it's worth hearing (and that is saying much; think of some of the not-so-great poetry one can hear in the context of these sorts of projects). His music combines Afro-Latin percussion and a polyrhythmic approach with a post-Trane-Tyner-Pharoah-Sanders sensibility that works quite well.

And there's much else going on. Like for example a merengue version of Sonny Rollins' classic "East Broadway Rundown!" There's an Indian classical sort of number with bass clarinet acting as the solo instrument, there's a traditional Yoruba-Cuban chant adapted for a modern approach. There's no shortage of inspiration.

It's all good. It's the sort of thing I like to hear. Paul can play and he has a discerning composer's-arranger's sense of how to meld disparate sources into something new. Highly recommended.
Posted by Grego Applegate Edwards at 4:58 AM