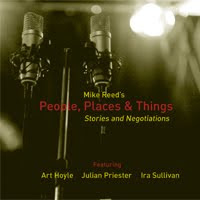 Mike Reed's group recordings are pretty much all worth checking out. We looked at his last one earlier in this blog (see the November 2009 entry). His new one, Stories and Negotiations (482 Music), out in about a week, really puts it in overdrive. Recorded live in Millennium Park in Chicago, this is music of a very high order. The project seeks to re-introduce and re-make some important but somewhat neglected moments in Chicago's all-important earlier jazz scene, 1954-60. Reed chose some worthy compositions by John Jenkins, Sun Ra, Wilbur Campbell, Clifford Jordan, and Julian Priester. Rounding out the album are three interesting Reed originals paying tribute to three of the performers appearing in this special edition of his group, namely Priester, Ira Sullivan and Art Hoyle.

The idea was to combine current members of Reed's People, Places and Things (Greg Ward, Tim Haldeman, Jason Roebke and of course Reed himself, and the addition of the hip trombone of Jeb Bishop) with the above-mentioned masters of the music, guys that have played key roles in the historic Chicago scene yet remain very active and together players today.

The results are quite worthwhile. Hoyle's trumpet, the distinctive trombones of Priester and Bishop, the two-tenor lineup of Sullivan and Haldeman, Ward's alto plus the rhythm team of Roebke and Reed. . . make possible some phenomenally productive improvisational contrasts between two generations of players, and arrangements that take advantage of this larger instrumentation and its full sound.

What is interesting is what happens when this diverse group gets together. The fact is, everybody sounds great, hip, on top of it. They've managed to mesh stylistically so that it's not a matter of old versus new, but rather some great players out to PLAY. The results are refreshingly old-new. It has the bop-and-beyond sensibility but it's all redone to sound thoroughly contemporary. The arrangements and soloing routines work well. There are moments of simultaneous improvisation that really hit the nail on the head. And the arrangements are completely in synch with the soloists and elaborately conceived.

This is music you have to hear. It's not old school, and it's not new school. A serious listen is like GOING to a very HIP SCHOOL, though. Because the collectively combined years of blowing and dedicated attention to the music from all concerned yield big dividends.

This isn't old music. It's not new music. It's timeless music. Mike Reed swings the band into an orbit anyone with a penchant for the music will love. I'd venture to say it's one of the hippest, most enjoyable such outings I've heard so far this year. In short, do not miss it!
Posted by Grego Applegate Edwards at 4:47 AM