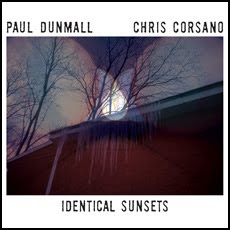 Paul Dunmall and Chris Corsano produce in the just-released Identical Sunsets (ESP) what I call a "honker." That's the word I use as a personal reference to music that is high-intensity, free from overt thematic material and rhythmic pulse, that freely traverses the latitudes and longitudes of the instruments at hand and their extended sound-producing capabilities.

The reed and drums honker configuration had its seminally formative moment in the series of duets John Coltrane and Rashied Ali so masterfully created in those last years of Coltrane's existence. Interstellar Space (Impulse) was the first album to be released of these duets; at least two others followed with the rest of that encounter. The session was by all accounts foundational.

Dunmall and Corsano reference that avant tradition in this new release. Drummer Chris Corsano has had a pretty extensive run of honkers with reedman Paul Faherty (many released on Cadence and CIMP Records) and takes a busy yet sensitively responsive approach to his role. Paul Dunmall shines forth on this disk as a very worthy constituent with field pipes (bagpipes) in a short segment, then lots of high density tenor. There are moments of relative quiescence to give the listener a break from the frenetic barrages. That just makes the return of their wailing, throttling musical flux all the more impactful.

If you like the flat-out free-for-all of a honker session, you'll love this one. They may loosen the fillings in your teeth, but they do it so well that you wont mind.
Posted by Grego Applegate Edwards at 4:53 AM