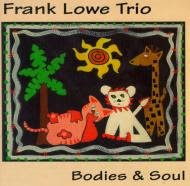 We return today to our short survey of notable still-in-print CIMP releases from the first few years of its existence. We cue up tenorist Frank Lowe in a recording with trio from 1995 entitled Bodies and Soul. It's a rather diverse set of numbers that encompasses the loose to the structured, the jazz standard or newly standard, and the newly new.

Charles Moffett, a regular visitor of CIMP studios in those early days, turns in some strong section and solo work on this record. Bassist Tim Flood is solid. And Frank lets lose with some gems.

At that point in Mr. Lowe's career, like Don Cherry on some of the last sessions he did, there is a reconciliation of the free and/or the avant fringes of the music at that point with the jazz tradition as it had been handed down. That process is made explicit in Lowe's performance of Cherry's "Art Deco" from this very period. And so also there's an unaccompanied tenor soliloquy on the classic "Body and Soul," done somewhat literally yet with a direct intensity. You get Trane's "Impressions" in a version that has fire and, in contrast to Lowe's "Body and Soul," has a rather non-literal rendering where Frank sometimes intentionally strays from the alternating pitch-centered modality, instead going where he will before returning back again to the to Trane's own technical mapping of the solo scheme, then off again onto a personal tangent and on from there.

There is an attention to Ornette-like melodic directness in some of Lowe's compositions here as well.

This is a more accessible but no less interesting side of Lowe. Compared to the ecstatic frenzy of his first album, Black Beings, we have a more domesticated Frank Lowe, if you will. There are moments of fire, yes, but a shift in focus. Of course that's one of the interesting things to follow if you hear Lowe's recordings in chronological order. He was not afraid to change, evolve, backtrack and re-synthesize.

Bodies and Soul provides a faithful and convincing portrait of Lowe at this point in his career. It is thoroughly enjoyable to hear and recommended listening. One can only feel the sorrow of incompleteness when contemplating this session. Frank had less than ten years to live (he passed away in 2003). The music was silenced forever. We lost a genuine original and the music he might have produced today. But we can only feel encouraged that there are worthy recordings like this one to appreciate even now. That helps ameliorate our loss.
Posted by Grego Applegate Edwards at 5:23 AM