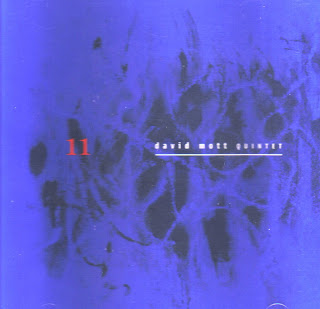 If I've devoted some attention to baritone sax-composer David Mott on these pages, it is because I think he is quite interesting and under appreciated. Today we look at his 2003 CD Eleven (davidmottmusic.com).

The early years of sound recording through the mid-50s, more or less, involved technology (cylinders, 78s, 45s) that allowed only about three minutes of music per side. Improvised music adjusted itself to those limitations and many artist managed to say much in a short time (think of Louis Armstrong's Hot Fives, Coleman Hawkins's "Body and Soul," the many Duke Ellington mastergems). With the advent of the LP, playing time stretched out to around 20 minutes per side, but you could still only fit around 40 minutes per record. The modern CD of course expanded available time to 80 continuous minutes. Improvising artists could now stretch out nearly indefinitely.

Naturally the luxurious time availability has occasionally led to a lack of focus, self-indulgences and other excesses, but generally it has been a boon to artists. On the other hand, saying something significant in three minutes is an art form that remains a challenge and when done properly leads to a very different listening experience.

Enter David Mott and his CD Eleven. On this outing he and his Canadian quintet (bari, tenor, trumpet, bass and drums) create eleven composition-improvisations inside the space of forty minutes. Most of the pieces clock in around three minutes. The return to miniaturism yields fascinating and quite productive results. David's compositions tersely state their ideas, improvisations appear and say their say, then exit the stage. It's a great idea and it works quite well. It's another example of Mott's thoughtful presence and I recommend it strongly.
Posted by Grego Applegate Edwards at 5:24 AM