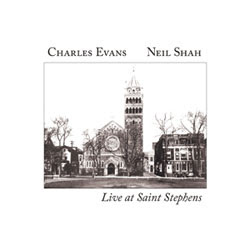 I was so taken with baritone saxophonist Charles Evans' last album The King of Instruments that I named it one of my top-ten favorites last year in the Cadence Critics Poll. That album features Charles in a solo outing, with well conceived overdubs so that at times one was listening to an all-baritone choir, other times a naked single baritone unwinding with some brilliant compositional-improvisational gestures. I was impressed.

So when I received his latest album Live at Saint Stephens (Hot Cup) it was with some keen anticipation. This is an on-location recording of duets with pianist Neil Shah, and it does not disappoint.

As with the previous album, inventive compositional elements intermingle tightly with improvisational aspects and the sound color and range of Evans' horn forms an important part of the overall presentation. Pianist Shah contributes a great deal of subtle pianism on this one. He has a touch and attack that show some affinities with the classical piano tradition, but he also contributes improvisations that show a well-developed and distinctive spontaneity.

This is a program of pieces by Evans (all but one) and they have substance and weight. The improvisations are melded effectively so that one does not have that breaking off point where one thinks, OK, the improvisation begin here, the composition is over. Partly that is due to the improvisations coming so organically out of the composed material that they extend the music naturally. There is no Frankensteinian stitched head onto stitched body with stitched on arms that sometimes can be the case in these sorts of settings.

There is a improv-meets-concert-music feel to this program. And it proceeds in ways that make that intersection of styles seem completely right. That is in no small part due the conceptual rigor of Mr. Evans and the rather inspired nature of Evan's and Shah's playing on this occasion. The music is subtle, but the rewards to be gained by listening are not. Charles Evans is bearing the torch of continuity that has been passed on from those that went before, but he also adds new colors to the flame. Highly recommended.
Posted by Grego Applegate Edwards at 4:55 AM