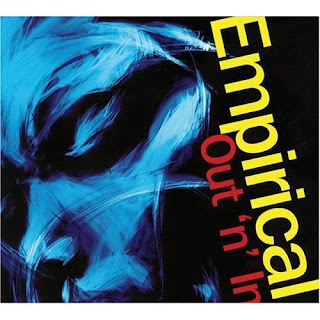 If recordings are any indication, the reputation of Eric Dolphy seems to be on the rise. There have been a number of CDs recently that either directly or more obliquely channel Dolphy's music. The Blue Note Out to Lunch album deservedly holds pride of place in such tributes. The excellence of that album was essentially a product of Dolphy's innovative and unforgettable compositions, the group interactions (vibes as shifting neo-harmonic anchor, intriguingly loose but swinging rhythm section, plenty of air for soloists play into) and of course Eric's stunning improvisations. Perhaps at last Dolphy has come out from the shadow of Trane and Ornette reputationally and has become a focus of appreciation on his own. That's as it should be.

Out of this current environment comes the group Empirical and their new album Out 'n' In (Naim Jazz). They too give the nod to Dolphy in his most creative phase. Two of Dolphy's best compositions ("Hat and Beard" and "Gazzeloni") are redone. The bands instrumentation (Nathanial Facey on the alto, Lewis Wright, vibes, Tom Falmer, bass, Shaney Forbes, drums, and guest artist Julian Siegel on bass clarinet and tenor) is more or less in line with Dolphy's Out to Lunch ensemble, and the band plays nine original compositions that show Dolphy's influence without sounding like knockoffs. Empirical also follow the loose-open quality of the group role throughout.

And all that makes perfect sense and is realized with finesse and artistry. What probably makes this CD a keeper is that this is not mere imitation and clonage. The originals have their own spin on the tradition, the soloists each bring to the session their own stylistic elements and they are all good. In short, this is not old music in a new wrapper, this is new music inspired by the spirit of Dolphy's art. And it is very good music. A tip of the hat (and beard) to Empirical for pulling this all off with panache. This is no mere tribute. It's speaking to today. Listen.
Posted by Grego Applegate Edwards at 5:39 AM