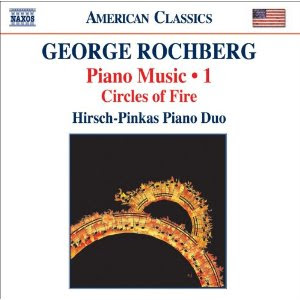 American composer George Rochberg (1918-2005) had his period of "high modernism," where stylistically unified works were carefully crafted using expanded tonality-atonality in the various ways that twelve-tone and serialist methods worked themselves out in the American new music scene of the '50s and '60s. He composed some very sonoristic, almost lyrical high-modern music and gained some amount of recognition in the first phase of his career. Then beginning I believe sometime in the late '60s he began circling back to earlier musical styles, the more tonal echelons of musical practice, from the Euro tradition of music through the late romantic period as well as American vernacular idioms. He combined any number of stylistic references in a work, including the "modern." Most importantly he did this with a kind of synthetic inventiveness where the wholeness of each piece was never in doubt.

This leads us to 1996-97, and his sprawling opus for two pianos, Circles of Fire. Naxos has embarked on an extensive release cycle of Rochberg's works for solo piano. The first CD is a recording of the above mentioned work, by the Hirsch-Pinkas Piano Duo. The performance is ravishing.

The music? It models Rochberg's later musical aesthetic by means of an intricate musico-cosmic metaphor. Circles of Fire is a massive, spiralling set of 15 movements, which Rochberg likens to the circling cycles of fire that create the principal bodies of the universe, then subject those bodies to the physical-temporal loops, symmetries and recurrences that comprise the playing out of intergalaxial systems.

Rochberg here conceives of, and realizes music in this manner, as a circling back to earlier musical styles and a cycling through to the returning "modern" present.

And so Circles of Fire makes alive this idea through a long symmetrical loop of musical movements, beginning in a "modern" style, on to "pan-tonal," rhythmically archaic sounds, almost ragtime, then onwards through musical forms that suggest older classical styles, romantic tone poems, impressionist color sketches, and other reference points as well, eventually coming full circle to the beginning point of the cycle.

This would all be well and good and rather pointless if the music itself did not have some inner compulsion and inter-relatedness. This music does. It is music that revels in each moment with memorable movements that cycle from forte stridency to the most pianissimo tenderness, all the time showing Rochberg's uncanny knack for incorporation and transformation. Everything is up for utilization, but it is the manner of going about it that shows Rochberg's substantial compositional gifts.

I'm not sure if it would be fair to say that Rochberg has gotten his due, that his reputation is quite what it deserves to be. Anyone who listens closely to this beautiful performance of Circles of Fire will find an entire universe (literally and metaphorically) of enchanting music to be savored sensually and to be understood cognitively. His reputation can only be forwarded by this release. The fine art of modern pianism appears in all its manifold glory on this disk. Need I say more?
Posted by Grego Applegate Edwards at 5:14 AM