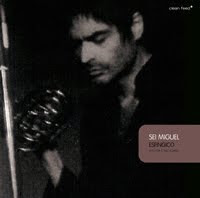 We live in exciting times. Don't let anybody tell you differently. For example in the world of new music, improvised or written. Virtually limitless combinations of instruments and forms are being created regularly. The former constrictions of "it's time to sound like this" or "it's time to sound like that" have been jettisoned in favor of a "do what you feel" aesthetic. In a world where anything goes, there is no guarantee that everything is equally good, of course, but that's been true of music from its very beginnings in some dark cave or wherever it was.

Sei Miguel, Portuguese trumpet wielder and conceptualist, shows the positive side of contemporary developments. His new Esfingico: Suite for a Jazz Combo (Clean Feed) goes its own way but with a rather sharply defined set of roles and sounds for the group Sei has put together. There are the two front-line instruments, Miguel on pocket trumpet and Fala Mariam on alto trombone. They tend to play the most prominent lines, apparently partly improvised, party pre-conceived in a compositional sense. Throughout the six movements of the suite they hold forth in a series of controlled yet expressive emanations that set the style parameters. They do not engage in blowing session hi-jinks (which of course are valid too) but instead unveil melodic textural lines in a non-urgent yet well-honed fashion. Miguel has an approach that Mariam stylistically complements, and the results make for good listening.

If my description of the various instrumental roles seems reductionist and simplistic, consider it only a convenient shorthand for what happens musically in this suite. It is a rich yet subtly unassuming, stylistically singular and integrated piece of music. It may not alter the way the world turns on its axis, but Mr. Miguel doesn't appear to have that as his objective. The music wends its way and provides a rather unique, undeviating path to a place that is not so much challenging as it is reaffirming--of the power of musicians to speak to the world on their own terms, without compromise but also without aggressive intent.

I found this music a treat for the senses. You must meet it halfway; then all will be well.
Posted by Grego Applegate Edwards at 5:05 AM