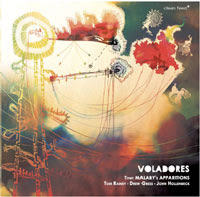 I am guilty. I have not paid enough attention to the tenor and soprano work of Tony Malaby. And so when I first put his new album Voladores (Clean Feed) on the player for a spin, I really didn't know what to expect. What I got was an impressive recital from his group Apparitions, which is Tony along with the always interesting Drew Gress on bass plus drummer Tom Rainey and drummer/percussionist/malletman John Hollenbeck. There are eleven pieces, one by Ornette, three group improvisations and the rest Malaby originals.

The tracks provide a stimulating framework for the improvisations that Apparitions quite convincingly put across. The free-oriented ensemble of the two busy drummers, Drew's rangingly dynamic bass and Malaby give density but not clutter to the sound stage. What most impresses is Malaby's solo work. He has a sureness, especially on tenor, and a fluidity of line that put the emphasis on musical creation. He does not sound like anybody but he phrases with the confidence of a Trane. He can string together some startling sixteenth-note runs, then hang back and lather up some rich, sultry Ben Websterish effusions, then dive into multiphonic tears. And he has masterful control over the sounds he produces. Listening to this disk will make a believer out of you. A believer, that is, in the importance of Tony Malaby in the many-acred pool of crafty manipulators of the horn of plenty (or of scarcity, depending who is playing)!

Seriously though this is one headlong plunge into first-notch improvisation, from a group that one could no doubt listen to in an evening's worth of sets and emerge energized and refreshed. Nice job!
Posted by Grego Applegate Edwards at 4:29 AM