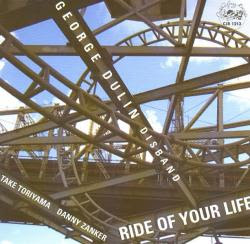 The pianism of George Dulin has all the linear thrust and power of a Bud Powell, but different notes! He's rather young but his play does not sound like it. There is a fully formed vision of how to go about his art. He is joined by thoroughly hip trio-mates on the Cadence Jazz album Ride of Your Life. Danny Zanker plays a forceful and note-refined bass. He solos with aggressive flair, plays ensemble passages with drive and walks (and sometimes skips along) with some of the best. The late drummer Take Toriyama has creative energy and a real stylistic thrust that helps make this group excel. He is replaced on three numbers by Jordan Perlson, who does the right things as well, if perhaps not as startlingly so.

The program contains standards like "Round Midnight" and "Monk's Mood," and a series of highly engaging recompositions of further standards. "Ella's Night-Light," for example, reworks "Stella By Starlight" ingeniously. The re-presentations are so inimitable and so complete that their original reference points become almost irrelevant. There are also a few quirkily engaging originals that are more or less tabula rasa.

Dulin plays plays bop without the bop. He has rethought the roots of modern jazz and remade them in his own stylistic image. A description of his playing? He has a harmonic grounding in traditional form and at his own volition, deconstructs, reconstructs and supersedes those forms at will. There is a rhythmic abundance to his playing at times, the modern equivalent to those semi-bizarre, tumbling anarchic introductions Erroll Garner pulled off so dramatically, only they are not quite the same, and they don't introduce anything but themselves.

Other times he gets into a linearly swinging chain of notes that don't have the least bit of cliche about them. Still other times he can go into a rubato passage that gives his own take on those pianists that came before in this mode, only he does not quote!

There is much to dig from the standpoint of the trio. Nice arrangements, profound drumming, bassmeistering of a high sort. . . .

Anyone who looks for something rooted yet innovative in the piano trio bag will do well to listen to Ride of Your Life. Dulin could well be a major new voice and you are getting in on the ground floor.
Posted by Grego Applegate Edwards at 4:50 AM