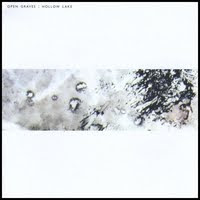 I rely upon the kindness of strangers. OK, so I watched that movie again last weekend (A Streetcar Named Desire) and it still kills me. But I do depend on people I have never met (for the most part) and the music info dissemination network. If it weren't for that I would never have known about the group Open Graves and their CD Hollow Lake (Prefecture).

The group is Paul Kikuchi on percussion (the drummer for the Empty Cage Quartet, whose CD I reviewed earlier on these pages, among other associations) and Jesse Olsen, Bay Area composer and performer. Those preliminaries tell you little, just as I had no idea what to expect when I first put this CD on my player.

It is first off important to note that the entire album was recorded inside an empty two-million gallon water cistern. That factor gives the music a hugely cavernous resonance that makes the sound distinctively ambient. Kikuchi and Olsen wisely make full use of that sound by populating the eminations with plenty of room, with space between sounds and notes so that the full impact of space and sound becomes primary.

The musical sounds are produced by percussion instruments and a long noted, eastern sounding string instrument (sounds like something out of Harry Partch, but in an infinitely lengthened temporal world) among other things. The music is partly improvised, partly composed, and sounds like it belongs with some kind of ritual for a world we do not yet know. Parts consist of very long event-centered series of resonant sounds, other parts have a quasi-gamelan like quality and feature more pulsating chimed phrases.

This is music for your deepest brown studies. It has a kind of rather profound stillness to it in parts; in other parts it moves one along on a well-conceived path. Either way this is highly original, very moving aural sculpture that should be required listening for anyone who likes music in the long form, the lingering phrases, the feeling of universal expansion. It's subtle. And it is an uplifting experience.
Posted by Grego Applegate Edwards at 5:20 AM