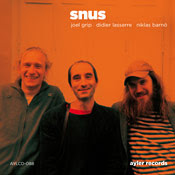 Ever since it has become a productive form of Western music making from around 1960 through to today, free improvisation has not always found large audiences, especially in the States. And yet it is a rather natural form of human activity. The "great composers," many of them anyway, were excellent at it, Mozart, Bach and Beethoven especially. Consider also those itinerant musicians of ages past who provided the music for local dance events (on several continents). They would show up with a certain amount of prepared melodic material and then would often freely interpolate of an evening.

SNUS (Ayler) is the happy product of a trio consisting of Swedish musicians Niklas Barno, trumpet, and Joel Grip, contrabass, plus the seemingly ubiquitous French drummer Didier Lasserre. They virtually, effortlessly provide a set of music that flows with a natural quality. And like others in this genre they in some ways inherit the venerable traditions mentioned above.

A trio with trumpet as the principal horn is a comparative rarity. SNUS makes it seem an inevitable outcome of their individual talents and preferences. Part of the situation has to do with the taxing nature of the trumpet embouchure. To be the only horn soloist in a small group means that the player does not necessarily get the rest his or her lips demand. There seems to be no problem on that score with Mr. Barno's chops. He sounds comfortable and quite capable throughout the program.

And more than that, Barno has something to say on his horn and he does so with extended tonal techniques and sonically interesting improvisations. He's a post-Cherry, post-Bowie sort of player (and of course those trumpet titans have shaped the modern free player enormously). But again, there are some timbres and textures that the trumpet can produce naturally. Cherry and Bowie exploited those possibilities with an ingenious conceptual thrust. Barno too uses the physical tone production possibilities available to him, but to his own ends.

His music mates in SNUS cajole, comment and set up complementary color and melodic elements that make the whole more than a sum. There will always be a qualitative element to a free improv gathering, and that's of course true of any musical event in any style. With the music at hand that is especially critical and accounts for the fact that a musical transcription of what transpires on this disk would leave out so much in terms of sound and attack as to be only a small percentage of what to hear and listen for.

Hearing may be believing. SNUS is unpretentious, alternatingly playful and raucous music making that you can believe in. And there is an element of fun, the thrill of free interplay that pervades the program from beginning to end. This recording will not change the world a whole lot by its existence. It will, I hope, provide you with fifty-plus minutes of creative sound production that will excite, enchant and enlighten. SNUS catches three imaginative musicians in the unselfconscious act of creating musical magic out of thin air. It's a natural, human thing they do. And they do it well.
Posted by Grego Applegate Edwards at 4:45 AM