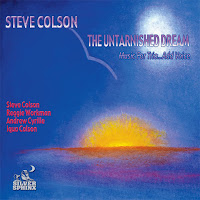 Pianist Steve Colson has been a member of the AACM (Association for the Advancement of Creative Musicians) since the early '70s, yet he is not a well known artist today. On the basis of his new piano-trio-plus-vocalist session The Untarnished Dream (Silver Sphinx), that relative neglect is undeserved.

This is not just any trio. When you have the burnished excellence of players like bassist Reggie Workman and drummer Andrew Cyrille, you have a most auspicious foundation. They deliver what you would expect. Adegoke Steve Colson writes music that has an abstract bop-and-beyond inclusiveness and a memorable quality. He reminds slightly of Andrew Hill, in the way he incorporates harmonic and rhythmic fundamentals of the music into a freely modern sensibility. That is not to say that he sounds like Hill, only that they both have a certain approach to modernity in common.

Colson's playing on these sides is a revelation. Whether relatively inside or more in the free realm, his pianism reflects the depth of someone who has drunk deeply at the well of inspiration and self-actualisation, and for a considerable time at that. He swings when he wants to and he spreads out the notes into a Byzantine fan of colors when he wants to. Andrew Cyrille and Reggie Workman follow and support with the master touch.

The pieces range from earlier compositions of the '70s to those written virtually yesterday. They give you a good idea of the scope of his writing talent.

The trio is joined by vocalist Iqua Colson for four of the numbers. She is a singer that has immersed herself in the music and shows a faithfulness to the nuances of Steve Colson's phrases to such an extent that it's hard to imagine a better vehicle for their performance. She is not a cabaret vocalist, thankfully; she is a musician's vocalist.

The Untarnished Dream provides a fascinating taste of an artist who clearly deserves wider recognition. Steve Colson goes his own way. We should follow along with our appreciative ears. This CD gives one a most compelling argument why that should be so. Colson is vital.
Posted by Grego Applegate Edwards at 5:42 AM