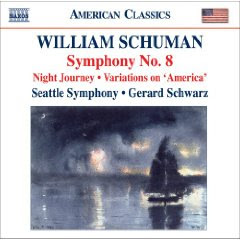 William Schuman was one of those larger-than-life persons when I was first embarking on a musical career. As president of Julliard, then Lincoln Center, he had a public presence rare for a composer of modern music in the 20th Century. One just knew about him if one was in and around New York at the time, and so one naturally found oneself wanting to hear his music.

Schuman is a composer for whom a gestation period is necessary, I believe. This is perhaps especially true for his Eighth Symphony, first performed in 1962 by Leonard Bernstein for the opening days of Lincoln Center. The music is dense, somber, intensely brooding, rather complex, and (like many of Harris's works), constructed on the principal of an unending melodic sprawl, made intriguing in the way the orchestration colors the phrasing with interesting aural combinations. It is a remarkable work, a work of pure invention, and perhaps its complexity has made rough going for the average audience.

Schuman's Eighth is not a work to be absorbed fully in one sitting. The positive side of that factor is that increased exposure to the work leads to almost infinite pleasures. The more one listens, the more Schuman's musical world reveals itself to the ears and the musical mind's eye.

There have been a number of recordings of the work. Bernstein's NY Philharmonic version more or less set the standard. However, the new recording by Gerard Schwarz and the Seattle Symphony (Naxos) certainly comes close to rivaling that original reading. Schwarz's interpretation is a little more linear; he connects the musical-phrase-dots in a way that brings out the musical logic of the piece. The sonorous qualities of the large orchestra needed to properly perform this work is captured in a full sound stage and the balance seems quite right. Schwarz's reading is expressive; it heightens the seriously somber quality of the work. In short, it is a lovely reading.

As a bonus, the disk includes the 1947 ballet Night Journey in its 1981 revision; and the marvelous Schuman orchestration of Charles Ives's delightful Variations On "America".

This is an indispensable installment of Naxos's complete Schuman symphony cycle. It is great listening!
Posted by Grego Applegate Edwards at 5:31 AM