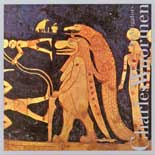 When I was in the peak of my aspiring composer days, schlepping around Manhattan soaking up what I could of the contemporary music world there, I attended a new music concert of works by the new modernists. George Perle, Meyer Kupferman, I believe, and a number of other composers were represented, all quite interesting, but what got my attention was Charles Wuorinen's chamber work "On Alligators." This was around 1972. What impressed me was its dynamic forward movement. It was post-bleep-and-bloop Webernism (which I still love BTW whether it is fashionable to do so anymore or not). It almost had the drive of rock music, yet it had lots of chamber color and complexity.

Charles Wuorinen by reputation was probably at that point New York's most well regarded new composer. He taught at Columbia, he had just won a Pulitzer Prize, he was big. "On Alligators" confirmed for me that his reputation was deserved.

Years went by, I set aside my compositional ambitions for a time, but I still remembered that piece and was vexed why it did not seem to be recorded.

I just discovered a fine Tzadik release devoted to Wuorinen's works, called appropriately enough On Alligators. It's been out for a little while but I am just catching up with it. It is an excellent anthology of various Wuorinen compositions. "On Alligators" is every bit as dynamic as I remembered it and the performance is superior. Then there's a densely written Fourth String Quartet, which is well worth the hearing. The longish organ piece "Natural Fantasy" has a booming kind of avant charm. And the Third Piano Concerto, from 1983, is another of his masterpieces.

Alligators and the Piano Concerto make this volume indispensable for those interested in Wuorinen and post-serialist, post-post-serialist modernity. He still strikes me as one of the best of the second half of the twentieth century. What he is doing right now I don't know but I am sure it is worth hearing. Meanwhile there's this one. I am so glad I finally can savor an excellent recorded performance of "On Alligators." Thanks to Tzadik for putting it out.
Posted by Grego Applegate Edwards at 4:56 AM